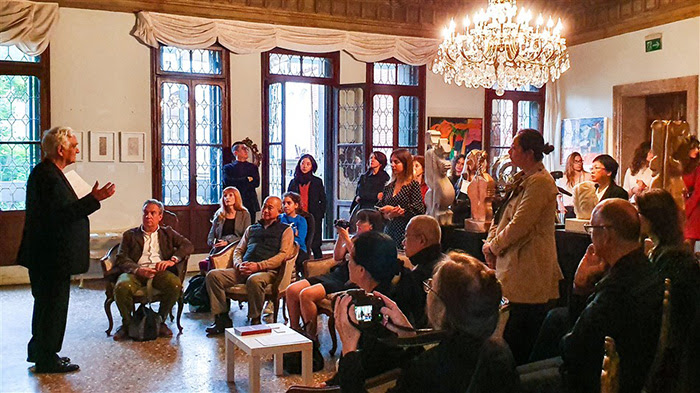 ITSLIQUID Group, in collaboration with Venice Events and Ca’ Zanardi, is proud to share the immense success of VISIONS, third appointment of ANIMA MUNDI 2019 – International Art Festival, curated by Arch. Luca Curci (founder and director of THE ROOM Contemporary Art Space, ITSLIQUID Group and Luca Curci Architects) that has been held at THE ROOM Contemporary Art Space from October 03 to November 24, 2019 and at Palazzo Ca’ Zanardi from October 04 to November 24, 2019 in Venice.

The festival focuses on the concept of ANIMA MUNDI, that according to several historical cultures, religions and philosophical systems, is an intrinsic connection between all living entities on the planet, which relates to the world in a similar way as the human soul is connected to the human body.

This invisible connection has been deeply interpreted by the splendid artworks of the participant artists, in particular, at THE ROOM Contemporary Art Space, by Alexandre Castagna whose photographs are without artifice and gifts us, simply, with a portrait of the heart of things. His work is also a call, more like a cry, for what we have done to our planet: we each need to play our own part in this matter.

Feeling that every human is able to translate from visual poetry to an introspective understanding of the world that surrounds us, Basim Ghomorlou, with “Shadow of Silence” depicts the aesthetics of nature in black and white to deliver certain universal feelings: “It is 10 years that I regularly travel in the Iranian desert: I understood that the desert was significantly different from every nature experience that I had to that point, it seduces with its softness and there is a violence that lacks any romanticism. Every year I return to the Iranian Kavir Desert: one result is this ongoing project, a series of black-and-white shots taken to invite the introspection I described.”

Combining his background in zen meditation and high-end construction, Adam Marelli paints possibilities of water. Unlike building on land, where materials are added to create forms, his painting removes water to reveal stylized architectural forms carved into lacunae of open sea surfaces. The opening of these voids parallels the process of Zen meditation, or zazen-a minimalist, seated practice. Silence occupies emptiness to generate an immaterial landscape we may navigate from within. Here, stillness is the move. 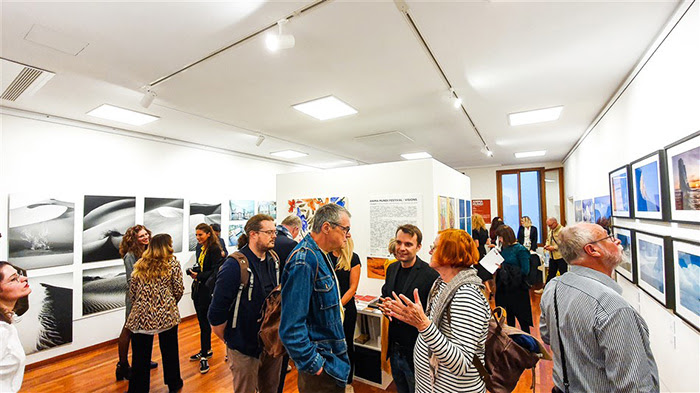 In Palazzo Ca’ Zanardi the opening started with the talk of the artist Vincent Robbins, who describes his works as experimental: he wants to experience more than just making a drawing on paper, he wants to being in the drawing. So, he is always exploring, through science and through common everyday situations with the space time textures, to show a relationship of hand gestures and the written word with typographical configurations shown in fine art prints. His purpose is to convey through performances, paintings and prints, works that reminds viewers about the mysteries of common everyday experiences.

Allison Harrell works directly with photographic subjects to create fluidity, comfort and personal expression in a statuesque space, enhancing skin with hand applied paints. She creates celebrations of form adapted to the physical experience of body in the moment, and these poses in ambiguous space create a template for digital painting process informed by the nature of light and color refraction. The result cherishes both the threads of humanity and aspirations of sculpting the human form along with the emotive range of a unique subject within a fraction of a second.

Robert Romano believes that natural beauty can be found even in places where you might not think to look. It’s remarkable what’s hiding in plain view – on the surface of lakes and rivers and at seaports. The colors are magnificent; the variety is endless. The beauty is more about form and color than about the physical objects they reflect. The images Judith Minks creates come from her heart and are based on her memories, experiences and fantasies: with self-reflection she gained an insight into how she functions which resulted in a breakthrough in her work; India Blake‘s photography focuses on nature, animals and portraiture and has inspired her extensive travels; Nick Kacic-Miosic is motivated by that genuine charm that only nature can directly refer and allows him to express himself intertwining the respect for past and desire for freedom, the freedom that is about to break out through the thin skin of stone and be enlisted or document the expression forever.

All those magnificent creations have been the magic frame for all the performances had during the opening night: Athina Kanellopoulou through revulsion, by eating the book of Savoir Vivre, seeks the sense of liberation from the label (etiquette) of established gendered social identity and the redefinition of the Ego as a subjective entity. Ayaka Tajiri wears a mirror mask as an observer who gives people the opportunity to express their dream experiences to themselves: we begin to realize that every experience is interconnected and they are all part of one consciousness. Francoise Berlanger, Daya Halle, Katia Lecomte Mirsky and Caroline Daish recite together, in a very elaborate, sonorous way, playing with sounds, rhythms and voices in “Les Lianes”. Jordina Ros & Pere Estadella express a clear critical, social and cultural vision, working on a map of transversal based on sensory creativity. Merel Noorlander, Ibelisse Guardia Ferragutti & Artémise Ploegaerts question why the body moves through different types of spaces in a certain way and how art can influence this physical experience.

This final appointment of ANIMA MUNDI FESTIVAL has highlighted how real, intense and forceful planet’s hidden connections are. This sinergy wouldn’t have been that strong without the contribution of the participating artists!

Art is liberation, it is communicating an inner part that sometimes lurks even to ourselves. Each of us is part of the world, socialization is a fundamental process for survival just like food and air. Art is a strong way to socialize.


2 – What’s your background? What is the experience that has influenced your work the most?

I am an ignorant painter, I have never developed the studies for the past or contemporary arts, identically for the techniques. During my 50 years I absorbed the beauty, in my subjective way of seeing, I filed it and then when I finally found a way to make it truly mine I started painting. It was like a newborn who hears the words around him, takes them in, but only with time he is able to put them in an order to construct a sentence that expresses his thoughts.
Therefore I can say that everything influenced me: the comics, my mother’s furnishing and fashion magazines, the covers of my brother’s records, the photos on school books, the images on television, nature, the world, in short, everything is visible and also what in reality I only imagined to be visible.


3 – Which is the role the artist plays in the society? And the contemporary art?

To play a role today the artist must be extreme, exaggerated, shocking … but I have a personality too respectful of the ideas of others, including those far removed from mine for wanting to scream to the world my way of seeing. So for me being an artist today is eating reality, chewing it, and then spitting it out, in my case, on canvas. I see, I translate in my mind and I show you the result. I don’t know how else to express my personal thought.

The creative process is an urgency, I begin to have an embryo of an idea, and it consumes me until I finish the work. While I paint I lose myself, it is like being in tranche or in a state of deep meditation.


5 – How is being an artist nowadays?

In my opinion being an artist today is a mission: an artist expresses feelings and ideas in a current world that seems to have forgotten feelings and ideas. An artist puts his face where others hide behind socials. An artist shows himself naked in public, shows what he is, exposes himself without armor, nowadays this is anachronistic, crazy and tenderly romantic.


6 – Do you agree with our vision of art and what do you think about the theme of the festival?

The concept of Anima Mundi is of oriental origin, but it was occindentalized in very remote times first by Plato: the concept that the world is formed by single but connected bodies seems easy to share, but looking at the current situation full of hate and Selfishness, Art can do a lot to show how much there is to change in our “modern” way of thinking by approaching each other.

7 – In which way the artwork presented in our exhibition is connected with the festival’s theme?

Mine is a simple, visual, direct art. Many call me “naive” and this is a great compliment to me, because the World, Nature, everything that surrounds it is simple. I think I am in tune with the co-existing world when I paint and for this reason the concept of Anima Mundi moves me, because it seems to me to bring something on canvas that does not belong only to me, this thought derives from the reactions I see in the people who observe my works.

8 – Did you enjoy cooperating with us?

Your organization was the first truly professional and international experience I interacted with so not only I enjoy cooperation with you but I am also enthusiastic about it.

9 – Do you think this can represent an opportunity for artists?

Certainly such an important location and such an attentive and modern direct organization can make the artist grow, creating new motivation in him and establishing interactions with other national and international artists

The festival was an intense and rejuvenating experience that provided me with many ideas for future work in a different perspective though related to my style. So thank you all.